Getting there is half the fun! Traveling from country to country in Asia can make for a beautiful trip through and across foreign worlds and sketchy borders (/s). Whether you choose to walk, fly, train, bus, car or elephant to Cambodia, it’s an adventure! Cambodia is a country rich in history, wonderful food, ancient culture, and was the center of the kingdom of Khmer in what comprised most of the countries in Southeast Asia including Laos, most of Thailand, Vietnam, and Myanmar. If your in Thailand it makes no sense to not go next door to see your amazing neighbors in Cambodia.

Bus Routes from Thailand to Cambodia 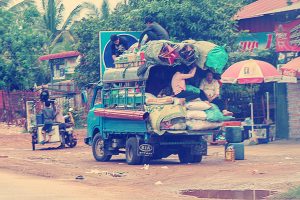 The best way to travel from Bangkok to Cambodia is either by plane, train, bus, or car. Walking might be nice as well. There are now direct bus routes between Thailand & Cambodia. Direct from Siem Reap to Bangkok for US $25 & back going twice a day, plus Bangkok to Phnom Penh & back for US $30. Bus Tickets – Bangkok to Cambodia Roads have improved vastly over the past several decades in Thailand and in Cambodia. There are several major bus depots in which you can obtain an affordable bus pass either in VIP bus or more economical small vans. Here are a few resources to look up to find best pricing and availability.

Traveling by Train in Thailand

The Thailand State Railway Transit (SRT) is a very nice and romantic way to travel. The nighttime sleeper train from Bangkok to Aranyaprathet departs out of Bangkok twice daily. It’s probably best to leave early as the border crossing used to close at 10pm. Tickets cost less than $50 for a First Class Shared Birth. Second Class Sleeper is roughly $30. From there you would take a tuktuk or or bus across the border…from there you can take a minivan over to see Angkor Wat. You can also take a speedboat to Phnom Penh.

Flying from Thailand to Cambodia

Flying has become quite convenient and very affordable between countries in Southeast Asia. AirAsia and Nok Air are most economical and offer No Frills services. It is recommended to spend a little extra for the flight insurance program which allows you to change your scheduled flight return.

Hiring a Driver or Renting a Car

Another alternative would be to hire your own driver, depending on if you have a group. Depending on the duration of your rental you could get it as affordably for $90 or less per day for full-time driver and van for your group. 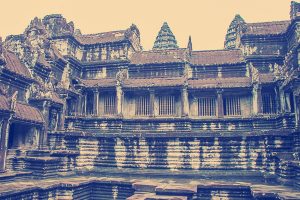 While in Cambodia, you’ll find the roads are in fairly decent shape, the weather is very warm and hot during the April March season, if you go to Siam Reap, you will be in the vicinity of Angkor Wat, one of the largest religious structures ever built in the world. It has amazing history and architecture, and more recently they discovered true satellite triangulation that Angkor Wat is much bigger than originally thought. Poverty is very apparent and there are times when the children can be a bit overwhelming, so if you have pennies or single baht to hand out you may want to be prepared for that. The Cambodian people are quite kind and respectful. It is indigenous of their Buddhist nature to be kind and helpful. Money has certainly change things for many countries but there are still pockets a very nice people you can find.